This doesn’t really have anything to do with my being Asian. It’s just a funny story I like to share.

I was on my way to Denver to visit my brother. I was leaving Tennessee and had a fairly early flight. I was sitting in the boarding area and noticed all these women flocking to this man with a high-pitched voice. I didn’t notice anything super “celebrity” about the guy. Only one bodyguard was with him (I guess he was the bodyguard) and neither of them was dressed up in some fancy name-brand suit. In fact, I couldn’t help but laugh aloud when I noticed what he was wearing. Black spandex shorts. It was Richard Simmons.

He had been in town to surprise this lady who had lost a lot of weight. I don’t remember the whole story as to why Richard Simmons was there for this, but he was. I had texted my brother that Richard Simmons was going to be on my flight and was sitting across from me in the concourse. He didn’t believe me and told me to get my picture taken with him.

I walked over to Mr. Simmons and said, “My brother doesn’t believe me that you are on my flight. Would you mind if we took a picture together?” He replied, “Only if you sit on my lap, Hunny.” Okay, that is a little awkward that this man would only take a picture with me if I sat on his lap, but I did it anyway. I mean, it is Richard Simmons.

So, I sat on his lap and next thing I know I’m thrown into this crazy pose. Then I remembered, Richard Simmons had on spandex. 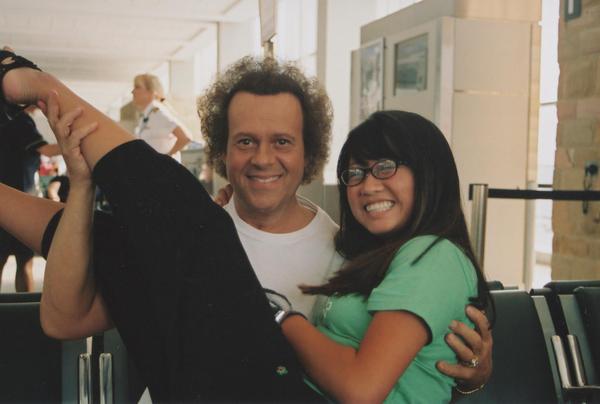